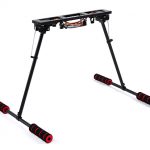 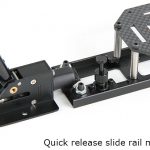 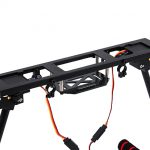 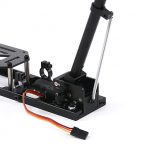 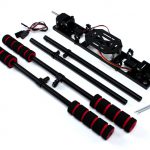 I bit the bullet and purchased the 600-class Quick Release Universal Retractable Gear Set to upgrade from the Crab Leg Landing Gear Set on my Predator 650 build.

Upgrading to a servo-driven landing leg set means the legs can be toggled to raise/lower from a spare channel on the receiver, I envision using this for aerial photography where footage is currently obstructed by the crab legs.

I chose the 600-class retractable gear set as I wanted only a single channel sacrificed on the receiver and didn’t want to run two 450-class sets – which is designed for smaller frames – in parallel.

To mount the retractable gear set to the frame I purchased 4 x Shock absorbing CNC aluminum tube clamp (10mm) which will fit the 10mm rails on the underbelly of the Predator 650 frame. A perk of this particular landing gear set is below the servo bar is ideal space to mount a camera gimbal, this be be done without modification.

Retractable landing legs arrived and they’re big! I’m thinking the 450-class set would have been fine, but I have not installed them yet so am still confident I made the right choice. Also the 4 additional tube clamps were unnecessary as the frame includes its own set.

The bulkhead that houses the servo’s has holes punched into it to suit a larger frame, they’re too far apart to be usable with the Predator 650 so I’ve drilled my own holes in line with the underbelly rails of the 650-frame.

Additionally since there’s so much space on either side of the bulkhead I’ll move my battery from the underbelly of the frame –  was strapped behind the 4-in-1 ESC and FPV camera – up onto the bar and install a 2nd 4500mAh 4S battery to balance the weight out.